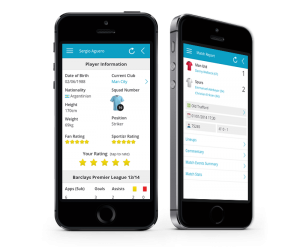 In late November we announced the release of a brand new Premier League football app on Android called Sportizr. We are pleased to announce that Sportizr is now available on iOS allowing iPhone users to download and access the app!

The app is FREE to download from the App Store with the free version offering access to clubs, players and matches relating to the current Premier League season. This includes live matches which can be tracked in real time, meaning you’ll never miss a kick! We also offer a Premier version of Sportizr which unlocks a number of extra fixtures. The most important Premier feature is access to our historical information, covering every Premier League table, club, player and match going right back to the start of the Premier League in 1992. Premier subscribers also get access to player transfer details, gain the ability to rate players and contribute to the “Fan Rating” system and get their app advert-free.